Recently, we were contacted by Christine, who works with medicalbillingandcoding.org, and she informed us about recently published article, “15 TED Talks on the Future of Medicine”, which she thought clicks with tone of our site and the passions of our readers. So, the article has been reproduced hereinbelow:

TED.com exists as one of the Internet’s most beloved sources of gratis education, with recorded lectures covering nearly the entire spectrum of human inquiry. Healthcare, one of the most heated socio political topics today, naturally sees itself on stage with frequency. Professionals inside and outside the field use TED to debut groundbreaking research, technological developments, and philosophies that might very well mean millions of lives saved throughout the upcoming generations.

Embrace, a nonprofit headed up by founder and CEO Jane Chen, quells the tragically high infant mortality rates in developing countries through inexpensive, portable, and electricity-free incubators. Not only does this revolutionize medicine, it also ensures more opportunities for babies who otherwise have none at all.

Explore the entirety of human surgery though this illuminating, almost-20-minute TED talk by Catherine Mohr. As both a surgeon and an inventor, she’s excited about the possibilities of robots performing intricate, delicate procedures too teeny for clunky, sometimes awkward human hands.

One of the world’s foremost Futurist thinkers, who calls the highly lauded Cambridge University home, opens up about his theories and research regarding the link between aging and disease. In fact, he considers the aging process in and of itself a disease, one for which — should a cure ever present itself — might unlock the key to living for a millennium or more.

The future of mental health lay with destigmatization movements by professionals, patients, their loved ones, and organizations such as No Kidding, Me Too! and Bring Change 2 Mind. Here, Stanford’s JD Schramm spends a few minutes discussing the importance of sharing suicide survivor stories and demystifying an often unfairly demonized tragedy.

Perpetually advancing medical technology may seem incredibly overwhelming to those in the field — and veritable hieroglyphics to outsiders. But there is a method to deciphering the madness, and this interesting (and graphic, fair warning) TED Talk lays it all out and discusses how to best catch up with the latest reading and visualizing strategies.

It may seem quite silly indeed to picture humanity “domesticating” germs the way it does for dogs and horses, but doing so might very well mean discovering permanent cures for serious diseases. Microbiologist Paul Ewald literally waded through poo to start researching this theory, which might mean completely reversing deadly bacteria’s hefty influence over the developing world.

Like the title of this TED Talk states, some startling advances in ultrasound technology might completely alter the shape of surgery forever. Rather than riskily slicing open patients, issues with the brain and other highly delicate organs (including cancerous tumors) might heal themselves via far safer procedures than those more familiar to contemporary medicine.

8. Deborah Rhodes: A tool that finds 3x more breast tumors, and why it’s not available to you:

Thanks to some highly unfortunate political maneuverings, Deborah Rhodes with Mayo Clinic cannot share her remarkable machine that detects potentially cancerous tumors in the breast at up to three times the efficacy of those in use today. Perhaps the future will see this unfortunately tangled tale right itself, and millions of men and women who might find their quality of life dipping thanks to a missed diagnosis will experience an upsurge in health.

Smartphones managed to worm their way into every facet of life already, so it probably comes as no surprise that medical technology professionals explore its potential to heal diseases and injuries, and are actually finding some pretty promising applications! Check out what one respected cardiologist has to share about what that iPhone and Android might very well mean in the hospital and doctor’s office alike. 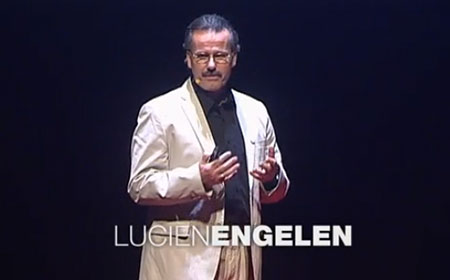 Another seriously cool TED Talk about how mobile technology may render healthcare even more sophisticated, not to mention potentially life-saving! One of the more interesting ways both medical professionals and the citizenry alike are harnessing its power involves whipping up apps to find the nearest defibrillators in the event of a heart attack or similar condition.

11. Harvey Fineberg: Are we ready for neo-evolution?:

Harvey Fineberg’s engaging lecture covers one of the greatest ethical debates of the current era, involving whether or not humanity should use its current knowledge of genetics and cybernetics to either halt or speed up the evolutionary process. Alternately, not bothering with Robocops and Replicants at all and just letting everything unfold as DNA intended.

Rather than diving into cadavers, the medical students of the future might learn about the human body via innovative, interactive, and life-sized touch screens offering up a little more insight than the raw organic matter. It’s all the education with none of the mess — plus the addition of computerized features such as zoom — which might also help save cash-strapped schools a bit of money in the long run.

13. David Agus: A new strategy in the war on cancer:

In a move sure to send the medical community into a buzz of debates, University of California medical doctor David Agus thinks genomics and proteomics play a major rule in oncology. He argues that a more interdisciplinary approach to the serious issue, including computer science, might very well prove far more effective in the long run than conventional methods.

Thanks to sophisticated optic and digital imaging improvements, prosthetic eyes might assist the visually-impaired in finally seeing the world in high-definition. Watch in amazement as Sheila Nirenberg illustrates how these technologies plug directly into the optic nerve and serve as extremely effective intermediaries between the brain and the external environment.

15. Thulasiraj Ravilla: How low-cost eye care can be world-class:

Pulling from his experience as the Lions Aravind Institute of Community Ophthalmology’s executive director, Thulasiraj Ravilla opens up about initiatives in India ensuring equal eye-care opportunities for all citizens. Best of all, they work, and he believes other countries and even human services might benefit immensely from their strategies.

To know more about us, mail us at rd (at) patentbusinesslawyer (dot) com.