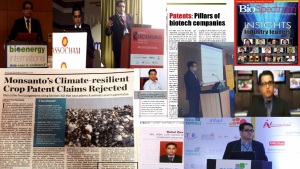 Ever since I appeared for the patent agent examination, way back in 2006, I have experienced numerous situations, which made me realize that issues faced by a patent agent, in India, are not so rare.

One of the major issues revolves around the use of terms, “Patent Agent”, and “Patent Attorney”, since the term “Patent Attorney” has not been defined specifically by law. However, it is pretty clear that such term shall only be used when one is a registered patent agent, as well as an advocate enrolled in the bar council.

I believe that presence of such lawyers is a boon to India, as it paves way for effective patent prosecution, litigation and enforcement of related rights. However, I would like to stress on the importance of scientific / technical educational background in our profession. There are frequent situations wherein even a bit of technical expertise drastically improves the scope of a patent application. For example, in 2004, in Chef America v. Lamb-Weston, the Federal Circuit had to interpret the meaning of the phrase “heating the resulting batter-coated dough to a temperature in the range of about 400° F. to 850° F.”

Imagine, how the entire meaning of the phrase had changed, if it would have been “heating the oven to a temperature in the range of about 400° F. to 850° F.” The literal meaning of the original phrase was that it required the internal temperature of the dough to reach between 400° F. to 850° F., which gave a very narrow protection to the patent owner.

Another important issue faced by patent agents is a kind of discrimination between patent agents and patent attorneys over various public forums. For example, recently browsing through questions asked on LinkedIn, I observed a question regarding implications of attorney-client privilege in India, wherein certain foreign attorneys mentioned that Indian advocates are bound by such privilege, whereas patent agents are not.

What hurt me most was the fact that certain Indian patent agents, who recently completed their law studies, and are enrolled as advocates, voiced the same opinion, in the same tone (rather harsher), and mentioned that it is always better to deal with patent attorneys, rather than patent agents. While browsing the profile of such person, I came to know that he is also a registered patent agent, had a technical background, and recently completed his law.

I am also pursuing law studies, but not with an aim of becoming a patent attorney, and disgracing my fellow patent agents publicly. As an Indian patent agent, one could have answered that question sensibly by mentioning that though such privilege does not exist for patent agents, however, as an alternative they can be bound by strict NDAs and other agreements, which would be governed by contract law, and other related laws of India, hence addressing the issue to some extent, instead of joining the league of foreign attorneys to thrash Indian patent agents publicly.

I think a possible way to address a majority of these issues is to change our own perspective of viewing this profession of patent agents, giving more respect to it, and addressing the issues rather than criticizing those again and again.

3 thoughts on “Issues faced by Patent Agents in India”